The Royal Concertgebouw and Gustav Mahler

Whenever I am going to travel anywhere I always check the local cultural calendar to see if there may be something worth getting tickets to see and when I am headed to Amsterdam I always check the schedule at the Royal Concertgebouw. I have never been disappointed and this visit was extra special.

The word concertgebouw literally translates into English as concert building. In April of 2013 on the 125th Anniversary of its opening, Queen Beatrix of the Netherlands bestowed the “Royal” title on the building as she had done earlier with the “Royal Concertgebouw Orchestra”. I got to see and hear both last night and I completely agree with the Queen. They are both deserving of their “Royal” title. The building was opened in 1888 and it continues to amaze musicians and concert goers alike and the secret of its world-famous acoustics remains a mystery. It is a masterful accomplishment of acoustical engineering, but it was built at a time when that science was largely misunderstood and there was no such thing as an acoustical engineer. 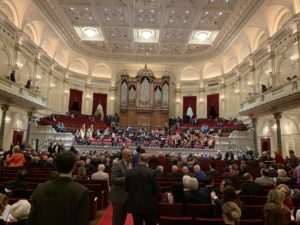 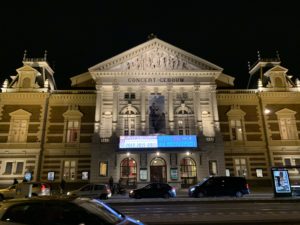 The performance was Gustav Mahler’s Symphony No. 7.  Mahler (1860-1911) was an Austrian Jewish composer and conductor and one of the leaders of his generation in both categories. For Gustav Mahler and The Concertgebouw, it was love at first sight. Following the composer’s first visit in 1903, he wrote, ‘in Amsterdam, I believe I’ve found my second musical homeland.’  He is credited with bringing music forward in the early 20th century out of the more traditional music of Wagner and Brahms. Rodin did the same for sculpture, the Fauvist and early abstractioninst did it for paintings and it all happened at the same time in Europe in the early 1900’s.

You do not have to be an “aficionado” of classical music to thoroughly enjoy this. The music and the setting will capture you, but I remember at one point focusing on the Bass Violin player in the last row of his section in front of me playing this beautiful music with the enthusiasm of the 1st Violinist. There is a lot to enjoy.

Photos and videos are not allowed, but I managed to sneak in this tiny taste of what it was like. You may have to be (very) patient while it buffers on your device.

I wish you could have been there with me.